Researchers use 11-BM data to make progress on new carbon capture materials. In this work published in Nature, the UC-Berkeley group of Jeff Long et al. describe their findings on a new mechanism for designing highly efficient CO2 absorbent materials.

From the paper... Synchrotron 11-BM powder diffraction patterns and the resulting solved structures of of metal-organic frameworks. 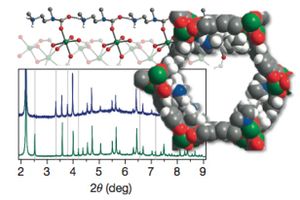 From the paper... Figure 2 shows Synchrotron diffraction pattern of products from hydrothermal preparation at temperatures ranging from 160 to 220 °C. A minimum temperature of 180 °C is required to obtain crystalline NaFeSi2O6. 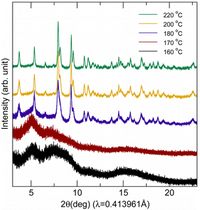 Researchers are exploring the possibilities of sodium-ion batteries by using the mail-in program at the APS 11-BM beamline. The results are published in the journal Nature Communications. The article and the 11-BM mail-in program were featured in the Argonne Newsletter in October 21.

From the paper... Figure 3 shows phase transitions and geometric considerations for Na within the subunit cell - by Synchrotron XRD patterns and schematic diagrams of structure. 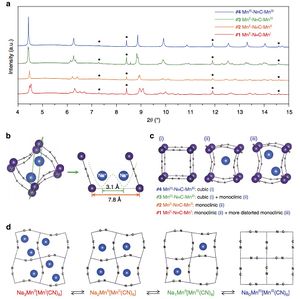 Researchers using the APS 11-BM beamline have found a new method for thermoelectric optimization. The results are published in the journal Chemistry of Materials.

From the paper... Figure (A) Representative synchrotron diffraction data of the sample with nominal composition Yb0.98Zn2Sb2, including profile fit, profile difference. and profile residuals..... 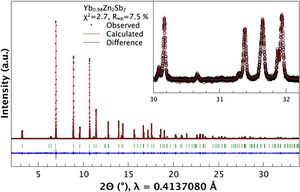 Researchers using the 11-BM beamline at the APS are investigating the interplay between electronic phase transitions to develop better memristors and electromagnetic modulators. Read more »

From the paper... Figure 1. (a) Synchrotron powder XRD pattern (λ = 0.413 746 Å) of δ-Ag0.88V2O5 nanowires acquired at 295 K. The measured data is depicted using black circles, whereas the red lines denote the calculated diffraction pattern corresponding to the refined structure (see Table 1). The blue line plots the differential between the measured and calculated patterns. (b) The structural refinement yields a composition of δ-Ag0.88V2O5. The refined structure comprises V2O5 double layers with vanadium (red spheres) atoms coordinated to oxygen atoms in a distorted octahedral geometry (green spheres)...

11-BM continues to show growth in the number of publications. 2013 again saw a new record number of user publications in a year. For 2013, 11-BM was the most most productive beamline at the APS! See a publications list here: More: http://www.aps.anl.gov/Xray_Science_Division/Structural_Science/publications_11BM.php#2013

An affordable sun-powered future could be closer than we think thanks to early tests on a new new ceramic material, which was developed by a team led by scientists at the University of Pennsylvania and Drexel University. The tests were conducted, in part, at the Advanced Photon Source housed at the U.S. Department of Energy’s Argonne National Laboratory. High resolution powder diffraction data from the APS beamline 11-BM was used to establish the crystal structure of the new compound.

A team led by chemist Dr. Kirill Kovnir of the University of California at Davis, has discovered a new class of thermoelectric materials. The group reports that Ba8Au16P30, a host-guest compound in which barium ions are trapped inside large gold-phosphorus polyhedral cages, exhibits unprecedentedly low lattice thermal conductivity. High resolution powder diffraction data from the APS beamline 11-BM was used to establish the crystal structure of the new compound.

The success of 11-BM continues and is reflected by continued growth in the number of publications. In 2012 a new record was set (again!) for the total number of user publications in a year. 11-BM is now the most most productive APS-XSD division beamline, with many high impact quality publications incorporating 11-BM powder diffraction data! See a publications list here: More: http://www.aps.anl.gov/Xray_Science_Division/Structural_Science/publications_11BM.php#2012

Congratulations! An Applied Physics Letters (APL) publication by 11-BM users from the University of Florida (Jones Group) is on the “most cited articles” list for 2011. See http://librarians.aip.org/promote/emails/aplmostcitedWV.html?TRACK=APLMC2012.

A recent science highlight comes from a collaboration between the APS and CNRS laboratories at Orleans. The work demonstrates a new processing route and new chemistries for highly transparent polycrystalline ceramics. These materials play an important role as optical materials for lasers, scintillators, optical lenses or transparent armor. Traditional manufacturing typically requires slow and expensive single crystal growth, and/or high temperature & high pressure processing. By contrast, the novel atomic structure of these new materials (which was characterized using high-resolution diffraction at the APS beamline 11-BM) permits low temperature processing directly from a simple glass precursor which can be easily formed into large and complex shapes.

The work was published in Advanced Materials Volume 24, Issue 41, pages 5570–5575, and was featured recently featured as a highlight on the main CNRS (French equipment of the NSF) webpage (http://www.cnrs.fr/inc/communication/direct_labos/allix.htm)

The APS X-ray Science Division is pleased to announce an enhancement to powder diffraction capabilities at the Advanced Photon Source. Effective from the 2012-3 cycle, the rapid acquisition (or ‘area detector’) powder diffraction program, formerly at beamline 1-BM, has relocated to beamline 17-BM. More Details: http://www.aps.anl.gov/Users/Communications/User_News/2012/user_news_81.html#01

A side by side comparison of APS powder diffraction beamlines is here (.pdf)

The format of the proposal for mail-in rapid access measurement requests at 11-BM has been revised. The new format features a single abstract section, and is intended to expedite and simplify the process for everyone, including users, reviewers, and staff. Rapid access requests are now reviewed by staff AND a international committee of external experts; the target review time is ~ 1 week. Read more: http://11bm.xray.aps.anl.gov/GUPguide0.html

Thanks to the hard work of beamline staff and users, 11-BM's growing user community sets a new record for the total number of user publications in a year. 11-BM is becoming one of the most productive APS instruments, with many high impact quality publications incorporating 11-BM powder diffraction data! Learn More: http://www.aps.anl.gov/Xray_Science_Division/Structural_Science/publications_11BM.php